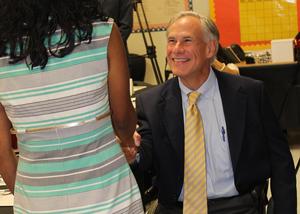 “It was a privilege for Comal ISD to be selected as one of three districts in the state which the governor will visit,” said Superintendent Andrew Kim, who has worked with the governor at the state level on behalf for teachers, students and parents. “This further showcased the leadership of our district by featuring just a few of our outstanding teachers who advocated for their profession and for students across the state. I am honored to be a part of their team. The governor left with better understanding of what today’s teachers face.”

Comal ISD Board of Trustees President Cody Mueller noticed that the teachers took full advantage of the opportunity they were given to speak with the governor not only for themselves but for teachers across the state.

“You could tell that the teachers were not just thinking about themselves or their campuses, but the entire state and what it meant to have the opportunity to have the governor’s ear directly and to talk with him about what teachers deal with on a day-to-day basis,” Mueller said. “They were knowledgeable and articulate and were able to communicate their needs to him effectively.”

The opportunity’s significance was not lost on these seven teachers who combined have almost 70 years of classroom experience. For Lisa Cramer, Brittney Lanehart, Aimee McCarty, James Patton, Bailey Riley, Javarius Smith and Gaby Torres, the governor’s visit was truly government for the people in action; a classroom lesson on civics come to life

“I am grateful for the opportunity to sit down with the governor who sincerely listened to us,” said Lanehart, special education team leader and head coach for the boys and girls track and cross-country teams at Smithson Valley High School.

The teachers were impressed by Gov. Abbott’s interest in their questions and their feedback on the issues being discussed and believed he left with a better understanding of how they work together.

For Torres in her 13th year as a teacher and sixth with Comal ISD, the governor seemed to really pay attention to what they were saying.

“He was very down to earth, and he wanted to hear what we had to say,” Torres said. “He even took notes. We offered our opinions, and he told us how they could possibly work or why they wouldn’t work.”

Church Hill Middle School Principal Jaime Alvarez-Calderon, State Senator Donna Campbell, State Representative Kyle Biedermann, Comal ISD Board of Trustee Vice President David Drastata and Comal Board of Trustee Marty Bartlett were also in attendance, and all agreed that pay is an important key to attracting and keeping the best teachers in the classroom.

“The bottom line is we are meeting with a very good school district with tremendous educators,” Gov. Abbott said. “I’m leaving here today more educated as we go back to Austin and begin to hammer out some very meaningful solutions. As we move into the next legislative session, my goal is to improve our school and improve education.

The governor praised Comal ISD for taking measures to improve school safety and for being an example for all districts in the state when it comes to efficiency.

“You have excelled at finding ways for schools to be more efficient in achieving better outcomes, and we look forward to taking the examples that you set and spreading them across the state of Texas so that across the state there will be greater efficiencies achieved.”

For Drastata who has served on the Board since 2009, the governor’s visit was recognition of the district’s work over the past six years.

“To me, this was a high watermark for our district. It is truly significant that he chose this district out of all the districts across the state,” Drastata said. “CISD is a shining example of what can be done when you have state finances the way they are, and whether we agree or disagree, we have managed as a school district to continue to find ways to grow in all areas, academically, extracurricular and in whatever context you want to look at.

“It is a shining example of the leadership that Mr. Kim has set and that we have continued to work aggressively to ensure that every campus has the best administrators and the best teachers, and that we are creating a positive learning environment. It was a great day for Comal ISD.”