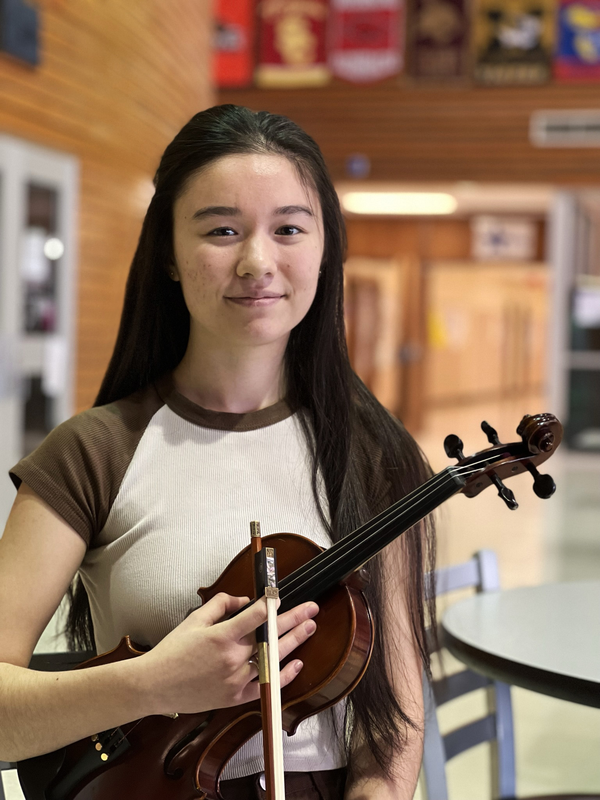 One of Comal ISD's students reached the pinnacle of success recently when she was selected as the first chair Violin I for the Texas All-State Symphony Orchestra. At 15, this Smithson Valley 10th-grade musician, explains how music is truly a universal language that unifies.

April 5, 2022 - This year’s concertmaster for the Texas All-State Symphony Orchestra is a 10th-grade student from Smithson Valley High School who has been playing the violin since the age of five.

In her first year to audition for Texas All-State, Ellie Kennedy, 15, was surprised that she was selected for the highly competitive orchestra and shocked when she was chosen as the first chair Violin I, who is the orchestra’s leader.

“When I got the results, I was very surprised,” says Kennedy, who moved to Texas two years ago. “I mean, it’s Texas. I still can’t believe it, and I had an amazing time at All-State. I wish I could go back.”

Kennedy led this year’s All-State Symphony Orchestra in February during the Texas Music Educators Association (TMEA) Clinic/Convention in San Antonio. The TMEA sponsors the Texas All-State audition process which begins each fall with more than 70,000 high school students across the state auditioning in their region. The best musicians in each region moves on to compete at the TMEA area competitions, and eventually auditions for spots in one of the All-State divisions – band, orchestra or vocal ensembles.

The poised musician explains that music has been a part of her life since birth with both of her parents, professional violists. In fact, her father was her first violin instructor, and she has always had music in her schools.

“I love that music is part of my school life, because it is part of me,” she says. “I think being a musician is very special, and it is enjoyable to be in a musical community with people with similar musical interests. I think introducing music at a young age trains the mind to be open to new possibilities and opportunities in the future. I believe that music should be encouraged for everyone.”

Kennedy didn’t always enjoy performing, however. Like many, she was afraid to perform when she was younger but has found peace with it now.

“I think I just understand music better,” she says, “and that is the thing about music, you just never stop learning. I continue to learn every time I play. I like performing on stage because I make it a goal to always leave a positive effect on the audience through music. I want to change the color in the room. Performing is an experience all on its own.”

Kennedy isn’t sure what her future holds as far as her career, but she knows that music will always be a part of her life.

“Music is a part of me,” she says. “It is a necessary tool to channel my emotions. Music is a universal language, and I think music is the one thing that we all have a similar interest too. It is the one thing we have in common.”

This summer, Kennedy will continue to hone her musical skills after being accepted to Boston University’s Tanglewood Institute’s (BUTI) program where she will work with professional musicians; take master classes and perform weekly concerts.